Pagano: All the gear is permanent. It was done specifically for the Pope’s visit, but it upgrades an existing SD system that RGB Broadcast installed 12 years ago. This new gear replaces all that old gear. The Basilica documents and archives special funerals, ordinations and other events, some of which are televised. That’s why they wanted the upgrade.

BE Extra: Do you have any important takeaways from this project? Did you learn anything new?

Pagano: After 30 years in the business, you always learn something new. On this project, you can always teach an old dog new tricks. In this case, there were new things about the HD cameras and cabling that impressed me. Just keeping an open mind is part of a successful installation.

BE Extra: Audio can be particularly difficult in big cathedrals. How are you acquiring and handling the audio?

Pagano: Audio in master control goes through a Soundcraft audio board, which is fed from the house sound system. House sound has independent feeds from the altar, choir locations and elsewhere throughout the Basilica. There are probably 23 mic sources that feed the Soundcraft board.

BE Extra: How does the signal get out of the Basilica?

Pagano: It leaves from the rear of the building at an interface panel for truck connection. There are program feeds, tie lines, clean feeds from individual cameras, intercom feeds and other sources. We will feed two trucks for sure, and have capacity for six more.

BE Extra: What happens to all the gear once the Pope leaves? How long do you expect teardown to take? 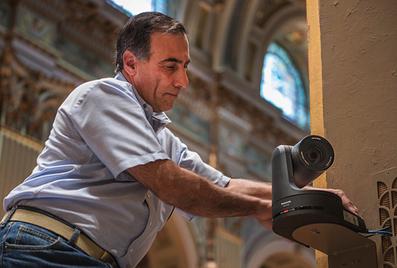 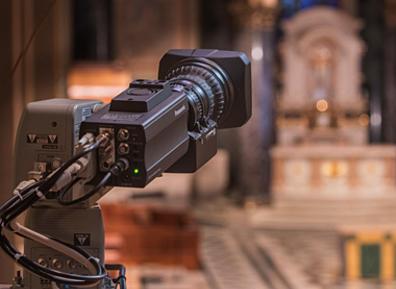 BE Extra: What sort of work does RGB Broadcast do? What are a couple other large projects that you’ve done?

Pagano: We’re a broadcast equipment repair center and installation company. We even do work on helicopters. We’ve been involved with the Archdiocese of Philadelphia for more than 15 years, doing video engineering and planning special projects. We moved Merck Pharmaceuticals video systems from one building to another and we also do frequent work for US Helicopters, which outfits choppers for broadcasters.

BE Extra: How did you get the contract to install the systems in the Cathedral Basilica of Saints Peter and Paul?

Pagano: Our longstanding commitment here gave the Archdiocese confidence in our abilities, so they came straight to us. An unnamed donor actually gave the funds for the project, and that made it possible for us to do the work.

BE Extra: How long did it take to get the job installed and functioning? What were a couple of the tricky or unexpected things that you had to deal with?

Pagano: About three months, because of the age of the building. Working in a 200-year old building, the cable paths were all old brick and mortar. It took my 30 years’ of experience to figure out ways to install and cable the gear. Core drilling, running cables behind trim – lots of tricky things to do on this project without disturbing the aesthetics of the building.

BE Extra: What are a couple of the important equipment items that you installed? Why did you decide on those items?

Monitors were installed throughout the sanctuary to provide views of the altar. 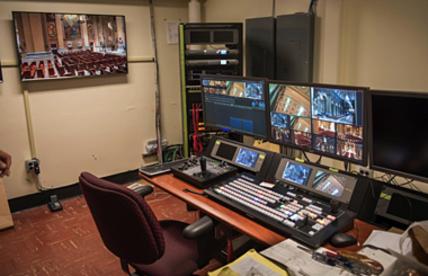 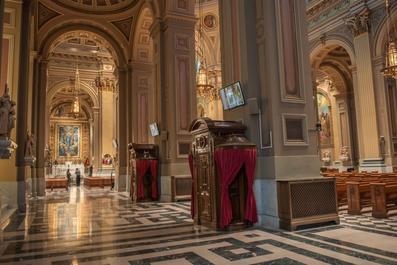 Two Panasonic AW-HE870 cameras with 20x Fujinon lenses were installed on pan/tilt heads to capture the coverage in 1080i HD.


PHILADELPHIA—Pope Francis’ historic visit to the U.S. is making non-stop headlines. Much of the population has been captivated by his genial personality and thoughtful message, but some are working behind the scenes to ensure that television coverage captures the important moments of this tour.

One of the companies charged with making sure we get to see the Pope is RGB Broadcast Video Services in Philadelphia, which was responsible for installing a complex camera system in that city’s Cathedral Basilica of Saints Peter and Paul. Broadcast Engineering Extra had a chance to talk to Joe Pagano, CEO and chief engineer of RGB Broadcast, to better understand how a company assembles a television system fit for a Pope.

Pagano: We decided to go with Panasonic broadcast-grade cameras because they fit the budget and far exceeded the necessary specs. We used six AW-HE130 cameras, which are HD-SDI, and we also had AW-HE870 cameras on pan/tilt heads with 20x Fujinon lenses. Pretty much everything is wired up for HD-SDI in 1080i format. The HE130 cameras have built-in 20x zoom lenses, which are good. The Fujinon 20x lenses on the HE870 cameras are a little brighter.

RGB Broadcast fabricated a full master control in the upper sanctuary of the Basilica. The switcher is a NewTek 800 series, with Blackmagic Design 20 x 20 routers. Monitoring goes through a Blackmagic 16-input multiviewer. This gear fit the budget and provides excellent video.

We used Belden 1794A cable throughout the system. It fit the budget and provides great signal characteristics. We used about 2,500 feet of 1794A on the project, and we also used Belden HD connectors. We evaluated the cable and connectors in advance of the project and determined it was the right product for us.